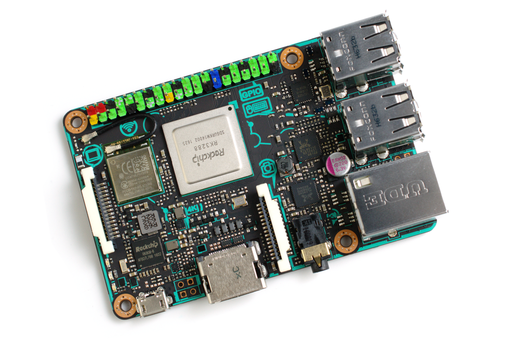 One of the first Pi-footprint competitors was the ASUS Tinker Board, introduced in early 2017. It had good performance (both CPU and GPU), 2G RAM, dedicated Gigabit ethernet, and several O/S choices including Linux and Android distros.

We liked the colour-coded GPIO pins and on-board icon labels for other I/O. We used it for experimenting with HCI devices including various specialized keyboards and breadboard circuits. The first Tinker Board was limited by the same micro-SD storage as in the Pi however. Later models included eMMC for greatly improved storage performance.

The Tinker Board has achieved a considerable following in Edge Computing and Internet of Things (IoT) applications. The newest versions enter the world of AI and machine learning. Shipping to Canada can be complicated so we haven’t included any direct links here. There is an official Tinker Board support site.